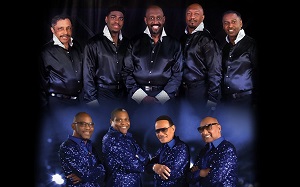 The Temptations & The Four Tops

Thanks to their fine-tuned choreography, and even finer harmonies, The Temptations became one of the most successful acts to record for Motown Records. During the group’s five-decade career, these Grammy winners have charted numerous #1 hits including “My Girl,” “Ain’t Too Proud to Beg,” “Get Ready,” “Just My Imagination,” and “Papa Was a Rollin’ Stone,” among many others.

The Four Tops teamed up in high school and spent over four decades without a single personnel change to become one of Motown’s most consistent hit makers. “Baby I Need Your Loving,” “I Can’t Help Myself (Sugar Pie, Honey Bunch),” “Reach Out (I’ll Be There),” and “Ain’t No Woman (Like the One I’ve Got)” are just some of their well-known hits.