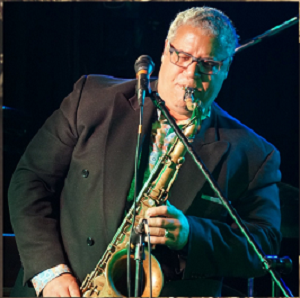 Saxophonist Billy Davis, Garon Richey on keyboard, Louis Natale on drums, Walt Stacy on guitar and Thomas Milovac on bass.
Admission paid at the door: $10 for Jazz Society & Veterans Memorial Center members, $15 for guests, students (ages 25 & under) free.
Bring your own food & drink – NONE are available for purchase, however…tables, seating, great music and a beautiful view of the river are provided.
Saxophonist and vocalist Billy Davis is originally from Iowa and is now a resident of Satellite Beach. He attended the Indiana University Jacobs School of Music, where he studied with Dr. Eugene Rousseau, one of the most renowned classical saxophonists in the world. Later, Davis toured and performed internationally as part of the opening act for the likes of Eric Burdon, Jim Hall, Black Oak Arkansas, Nitty Gritty Dirt Band and other well-known headliners. As a member of the Cedar Rapids Jazz Band, he played with jazz greats such as Ernie Watts, Eddie Daniels, Jimmy Heath, Bob Mintzer and steel pan artist Andy Narell. Davis was a member of the Iowa Arts Council and taught jazz at community based schools and colleges for 23 years.
Davis came to Florida in 2010 and has been performing locally ever since, at public events, private parties and music festivals. Iowa has not forgotten its native son however. In the fall of 2019, Davis will be inducted into the Iowa Rock and Roll Hall of Fame!
Tags: BillyDavis, Cultural Events in Brevard, JazzInCocoaBeach, JazzinMerlbourneFL, Main Page Carousel, SpaceCoastJazzSociety