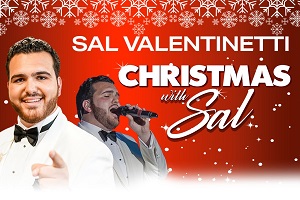 Golden voiced crooner Sal “The Voice” Valentinetti returns to the King Center on Friday, December 16th at 8PM to perform holiday favorites and standards that he’s known for with the Rat-Pack style that has made him a hugely popular entertainer since he rose to fame on America’s Got Talent. After belting out the classic Frank Sinatra hit, “My Way,” Sal received a standing ovation and was awarded the coveted “Golden Buzzer” from supermodel judge, Heidi Klum. Sal later performed a holiday duet of “Santa Baby” with Klum.

Meet and Greet after the show $50.00 (Does not include event ticket).