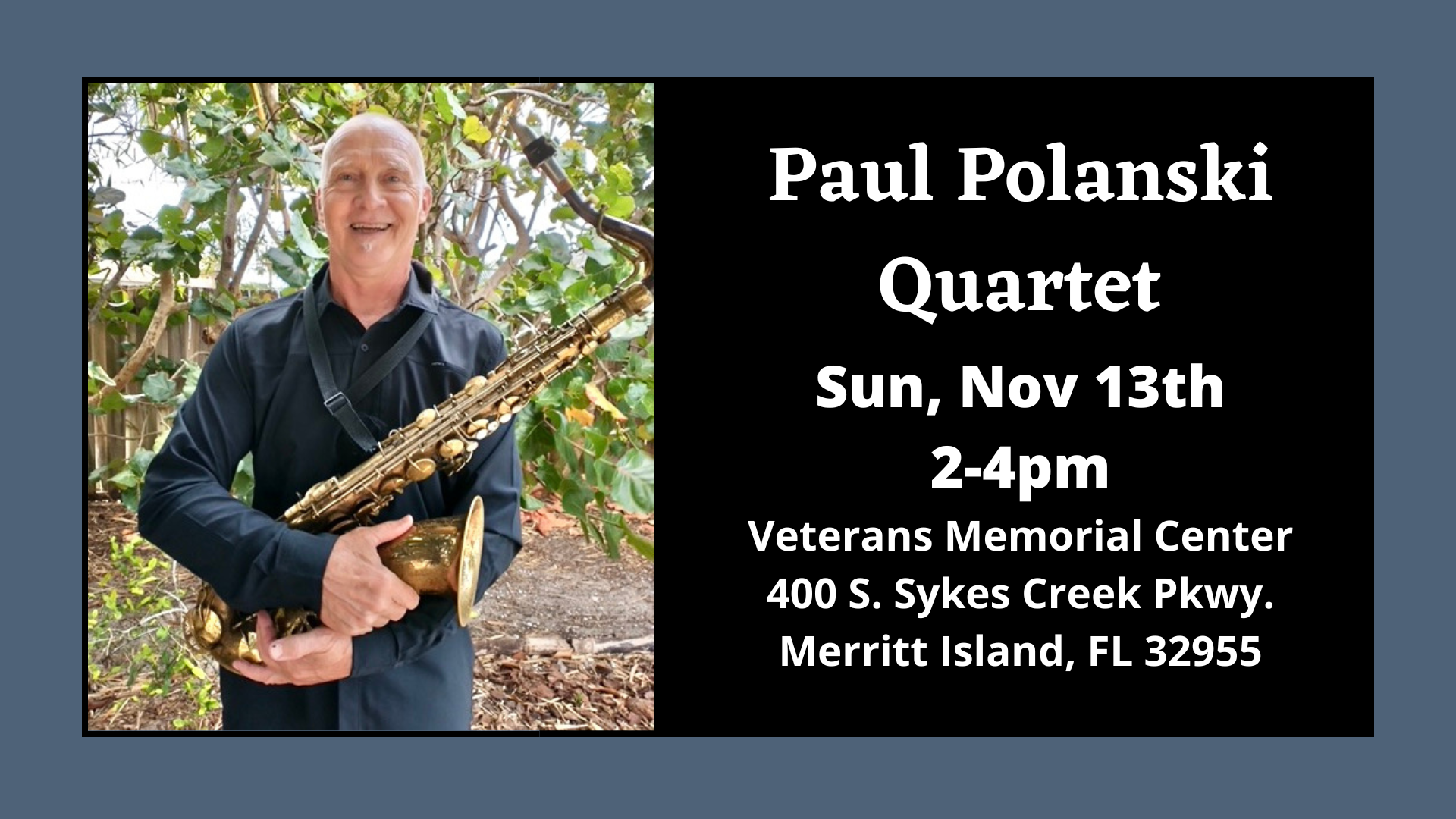 Saxophonist Paul Polanski will be joined by Stanley Polanski on the keyboard, Ron Pirtle on bass and Dimas Sanchez on drums.

Paul Polanski moved to the Space Coast in 1983 with a seven piece jazz/calypso/reggae band from Ohio University, in Athens, Ohio. He has started and played in numerous bands in the Melbourne area including the Ron Pirtle Quintet. Paul has been mentored by his older brother, Stanley, who presented him with his Selmer Mark VI in 1974. Paul’s style is strongly influenced by Dexter Gordon. Since retiring from his Physical Therapy profession, he now has more time to devote to playing and discovering new music.

Stanley Polanski moved from Ohio to New York in 1975 and studied jazz piano with Harold Danko and Hal Galper. While working a variety of music gigs in the NYC area, he was fortunate to play with jazz artists such as Ralph LaLama, Barry Ries, Eddie Gomez, Jimmy Madison, Ron McClure, and Mark Murphy.

Stan moved in the late 1980s to the Charlottesville VA area, where he connected with the vibrant jazz community. NYC veterans like John D’Earth, Robert Jospe, and Glenn Wilson became bandmates along with Carter Beauford and Leroi Moore from the Dave Matthews Band.

Stan’s career as a software developer later brought him to New Hampshire and North Carolina. He now lives in midcoast Maine and hopes to explore the jazz scene in that area very soon.

Dimas Sanchez is a Puerto Rican drummer and percussionist who currently lives in the city of Orlando, FL. Some of the musical styles he plays are Blues, Jazz, Country, Latin Jazz, Rock, Bomba, Plena, Funk, Samba Bossa Nova and others.

He has had the privilege of studying with musicians such as Tony Sánchez, Keith Copeland, Ignacio Berroa, Ángel “Cachete” Maldonado among others. In addition to being able to study Afro-Puerto Rican folklore when he participated in the 80s with La Familia Cepeda, his tutors were Jesús Cepeda, Petra Cepeda and Don Rafael Cepeda.

Dimas participated in the following percussion clinics or master classes: “Contemporary Drums and Percussion Summer Camp” in 2008 and 2012 at the University of Central Florida as an artist of Pearl Drums Corporation. In those camps also participated with the very well-known musicians, Horacio “El Negro “Hernández and Alex Acuña. Also a  master class on July 2017 at Punto Fijo, in the Fine Arts Center of San Juan, together with Jesús Cepeda. In 2019 he offered a Latin percussion clinic, next to the renowned drummer Marty Morell, at the”Timucua Arts Foundation” in Orlando.

Upright bassist, Ron Pirtle, moved to Florida in the 1980’s and was established as a dynamic and moving force in the local jazz scene on the Space Coast. Ron works regularly in jazz clubs and leads his own jazz group, the Ron Pirtle Quintet with whom he has recorded a CD. The Ron Pirtle Quintet consists of Ron on the bass (and the helm) with Stan Soloko on drums, one of several local players on piano and the swinging and highly compatible tenor saxophones of Brad Baker and Paul Polanski.

Admission: $15 for Jazz Society and Veterans Memorial Center members, $20 for guests, students under 25 yrs of age are FREE. Bring your own food & drink – tables, seating, great music and a beautiful view of the river are provided.