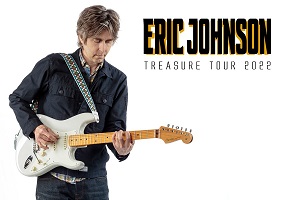 March 16, 2023 at 7:30 PM
Studio Theatre at the King Center
Eric Johnson has been traveling on a prolific odyssey over the course of more than four decades. Along the way, his creations have encompassed repertoire that cross pollinate genres which include rock, blues, jazz, fusion, soul, folk, new-age, classical and even country. Throughout his career, Johnson has approached music as a healing force, a way to enhance a listener’s consciousness, and conjure joy and inspiration. More than a year into the Pandemic, and because of the Pandemic, he reflects that this approach has become reinforced and more enhanced.The 2022 Treasure Tour will feature some of the previously un-released gems, some new songs, and some older favorites. His band will include Tom Brechtlein on drums, and Roscoe Beck on bass.
Tags: Cultural Events in Brevard, King Center for the Performing Arts, things to do in brevard